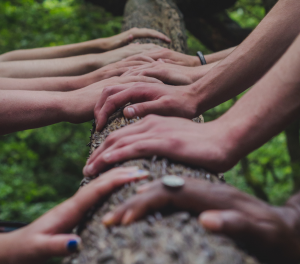 For some, the word sisterhood might conjure up images of naked women dancing around a fire (maybe not such a bad thing until you try it? Something to put on the bucket list?) and/or women who float around their daily existence calling every female sister and loving everyone. While I believe there are some individuals out there, past and present, who have done such an intense amount of healing and inner work that they really feel a sense of love and gratitude for every being, the rest of us still have our egos and our particular likes and dislikes. Sisterhood does not mean you have to like every woman you meet, but you could try respecting them. When did it become accepted in the common culture that women are catty? That we all gossip about one another? That we are so hard on one another? If there was equal pay for equal work, if women held at least half of all political positions and CEO jobs, if women were valued first for their minds and souls rather than their beauty—basically if women were not suppressed—would they feel this negativity, this self-hatred, and this need to tear their sisters down?

Without dwelling on cultural causes and blaming the patriarchy, how about we stop putting ourselves and our sisters down and stop reinforcing the stereotype? What if we as women were to start propping each other up more, and when we think something negative about another woman, we hold our tongues? This taps into the abundance mindset rather than having a scarcity mindset. At a young age, we learn a scarcity mindset, such as the teacher will only give out so many As, there are only four spots on the basketball team, only a select few students get into Harvard. And as we become women, it appears that only a select few make it to positions of leadership. We have the mindset that there are only so many pieces of the pie, so we had better look out for ourselves and watch out that another woman doesn’t take our place.

This is a short excerpt from the book, The Way of the Warrior Mama.